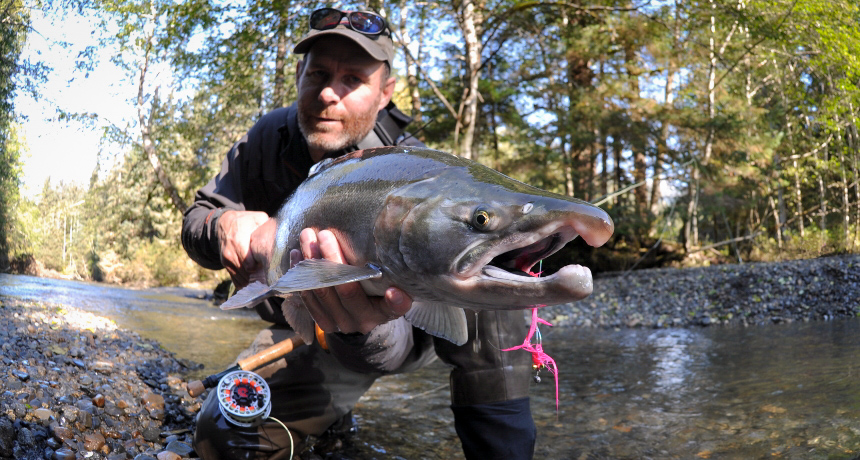 Meet the Fish
The "fall prince" of salmon, coho salmon are often referred to as "Silvers" for their distinct chrome-plated appearance when fresh from the sea. These hard-fighting salmon are available from July to November with most runs peaking in September, but in some river systems coho adults may be present for 10 months out of the year. Cohos vary wildly in size, with adults ranging from 3-25 lbs and averaging 7-12lbs. From the tide rips of the open ocean to the smallest tributaries of rainforest rivers, the coho is a ready and willing dance partner for the fly angler. Coho are available in all regions of the state, with Southeast, Kodiak, Bristol Bay, and the Kenai Peninsula receiving the largest runs.

Gearing Up
If a fly angler could only choose one rod to fish for cohos, the smart choice would be a 9 foot, fast-action 8-weight. The 8wt is a very versatile rod, and all manner of presentations to all sizes of fish are possible with it. Given the room and conditions, such as a calm day on a wide-open tide flat fishing for small to mid-sized cohos, an angler could get away with fishing a 7-weight, but for the most part the 8-weight is the tool of choice.  If you will be spending most of your time targeting coho in the salt water a faster action 8wt is the rod for you.  Both the Echo Boost Blue and the Sage Maverick are built for the salt.  These rods will handle the long casts with heavy salmon flies with ease.  If you are skipping the salt and waiting until the coho move into freshwater, consider a slightly softer 8wt.  The Sage Sonic is an excellent option here.  With a softer flex profile this rod roll casts beautifully and lends itself to mending and controlling your drifts.

Reels for coho should be of the large-arbor variety, with enough capacity to hold 150 yards+ of 20# backing, and should have a smooth, powerful drag system. The large-arbor reel is able to retrieve large quantities of line very quickly, which is a plus when angling for these speedy chrome bullets. When hooked, the coho salmon has a tendency towards rapid direction changes and bursts of acceleration, so a smooth-operating drag is an absolute necessity when pursuing these hard-fighting fish.  Given that a lot of the coastal coho fishing is done in both fresh and salt water we highly recommend people spend the extra money for a full machined reel with an anodized coating.  Cast reels work great in the fresh water, however they don't have the durability for years of use in the salt.  Coho are strong fish and our favorite reels for them reflect the need for bomber drags.  The best reels are the Nautilus CCF-X2, Hatch Iconic 7+, and Sage Spectrum Max.  For anglers on a tighter budget the Sage Spectrum or Lamson Guru will serve you well, but the drags on these two are not quite as powerful as what you get with the more mid to upper-level reels.

The best all-around line for coho is any line with an interchangeable tip system, and one that includes everything from full-floating to full-head fast-sinking options.  Rio's InTouch VersiTip 2 system really fits the bill here.  Built off a standard weight forward floating line with interchangeable tips that include floating, intermediate, type 3, and type 6, there are no situations where you won't find the correct sink rate.  While not totally replacing the practice of individual lines for individual tasks or situations, the tip-system lines provide the ability to switch levels and presentation methods without carrying 4 or 5 additional reels or spare spools. If you are looking for one line to do it all, a solid weight forward floating fly line will get you by in most situations, if you are fishing a 9ft Salmon tapered leader.  The Rio Grand is one of the best all-around lines, however, if you are planning on spending most of your time casting to silvers in the salt water look at the Rio Predator line.  The Rio Grand will be better for roll casting and mending, while the Rio Predator lends itself to bombing long casts from the beach into the salt using heavy coho flies. 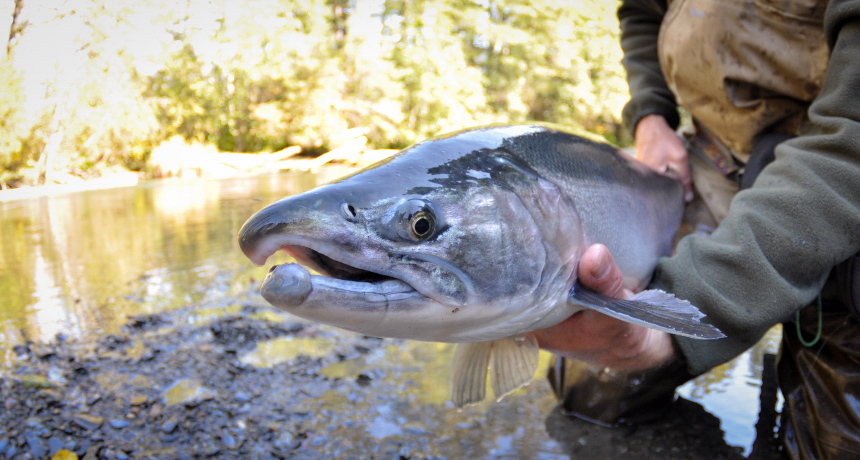 Common Techniques
The fishing of stripped streamers is probably the most popular and widespread method of fly-angling for coho salmon. In this technique, baitfish imitations or large attractor patterns are fished at medium- to high-speed by retrieving them with a stop-and-go motion, often pulling in or "stripping" line in 6-to-20-inch bursts at the rate of 60 to 100 pulls a minute. This "herky-jerky" retrieve is often the ticket when casting to feeding fish, as it closely resembles the motion of panicked baitfish. The stripped streamer method lends itself well to casting over moving fish as well and can be used with everything from full-floating to full-sinking lines with equal effectiveness.  If you are streamer fishing for cohos there are a few patterns that can work better than others. In general, the more movement the better so rabbit strip leeches tend to work well, however a Clouser Minnow can work wonders in the salt water.  Patterns to try include the Dolly Llama, S.T.S Leech, Articulated Polar Egg Hareball Leech, Clouser Minnow and UV Polar Starlite Leech. The quintessential Alaska fly, Dolly Llamas deserve a home in every salmon box.

Nymphing, often called dead-drifting, is another popular method of fly-angling for coho salmon. This technique utilizes small, often gaudily dressed patterns fished beneath a weight of some sort, usually a small split-shot or another nymph-type fly. The offering, almost always served up with a floating line, is cast perpendicular or slightly up current of the angler and allowed to drift free, or "dead", downstream, often close to the bottom. Careful "mending" or managing of the fly line for drag-free drifts is an important technique when dead-drifting and is characterized by looping line on the water to allow your offering to sink to the bottom and tumble downstream at the same speed as the current - "dead". Nymphing is also characterized by the occasional use of strike indicators - small, brightly colored foam floats that are helpful in detecting the slow, subtle takes of holed-up coho. Indicators may also be used to keep your presentation at a set depth, which is critical when fishing for suspended fish. Nymphing is the method of choice for static or holding fish, as well as when angling over uneven river bottoms or "slots", the up-and-downstream-oriented lanes that salmon hold in. Good flies for nymphing cohos include: Liquid Wrench, Deep Six, Steelhead Glow Bugs, Mercer's Sockeye Fly, and Sockeye Lightning.

While initially designed for steelhead, the Liquid Wrench is a deadly pattern to drift under an indicator for tight lipped coho.

Fishing stripped streamers and nymphs may be the most popular methods of fly-angling for coho, but the most exciting method would surely be top water fishing. In this technique, floating flies constructed of spun deer hair or foam are "popped" or "chugged" along the surface of the water over

schools of fish. The retrieval method is similar to the stripped streamer retrieve, pulling 6 to 12 inches of line at a rate of 60 to 100 pulls a minute. The top water method can be hit and miss, and occasionally spooks static fish in small water, but there are certain conditions that poppers really shine. Cohos often stage in estuary or tributary mouths, and these fish often seem to be the most willing to come up to the surface to take the "chugged" fly. While the method may produce fewer overall takes, it certainly makes up for this in the spectacular nature of the hits. Coho have been known to come clean of the water to land on the popper, and often throw up vee-wakes during the last part of their pursuit.  The best top water flies for coho generally come in either chartreuse, pink, or purple. Our favorites are Popper Wogs, Foxy Wogs, Polywogs, and Hammerhead Hair Wogs. 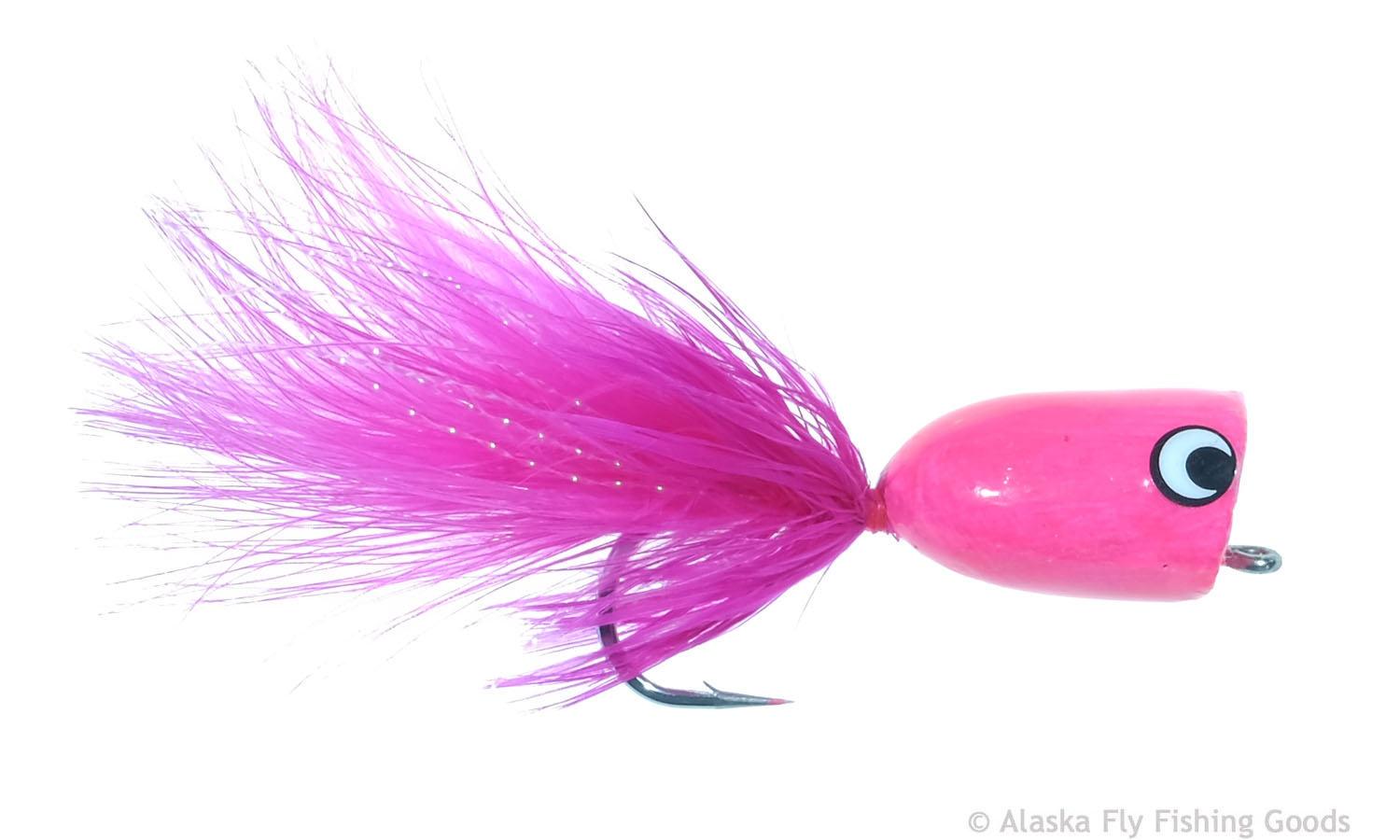 A method used for Atlantic salmon for centuries is just now becoming popular for Alaskan coho salmon, and that method is called swinging. The proper presentation of the swung fly has the offering tracking almost perpendicular to the current, and at depths varying from within a few inches of the surface to a few inches from the bottom. Traditionally espoused by spey and two-hand anglers (long flyrods cast with...you guessed it, both hands), the swinging method is rapidly gaining acceptance with the single-hander crowd. The basic setup for a swung fly calls for a fairly laminar (smooth) current flow in terms of riverbed to surface, and a slightly faster current flow on the bank opposite the angler. These conditions are often found on river bends, where the "soft inside", the slower-flowing water on the inside of bends, is where the angler positions themselves to fish the run. The fly, often on a sink-tip, is cast across and down the river at about a 45° angle, then allowed to track or "swing" into the near bank. This procedure is punctuated by a step downstream for every cast, and in this manner the angler can cover nearly all of the holding water in a pool quickly and efficiently.  In southeast Alaska we tend to like our two hand rods "switch" style.  These are slightly shorter two hand rods that lend themselves to "traditional spey" style casts, as well as maintaining the ability to cast overhead. An 11ft 8wt switch rod is among the most versatile rods you can have in Alaska, and they don't get any better than the 8110-4 Sage X.  Pair this rod with a full frame reel such as the Sage Spey reel and strike fear into the hearts of anadromous fish everywhere! 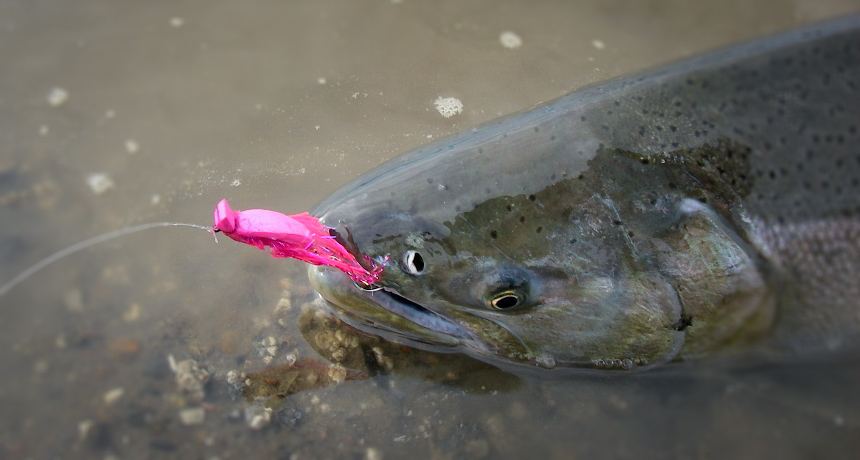 Putting It All Together
The techniques discussed here are by no means immutable, and in fact were evolved mostly by the melding of other techniques and disciplines within the art of fly-angling. Go ahead and swing a nymph or a top water fly, and by the same token, don't be afraid to nymph with a big streamer or string leech every now and then. Also, the areas and conditions whereby you employ these techniques need not be set in stone. If the urge strikes you to drift a nymph under an indicator in the saltwater, by all means do it.  For example, some of the funniest evenings fishing coho in Gastineau Channel has been using chartreuse glow beads!  Feel like swinging when the tide goes out in a channel? If there are fish present, go ahead and give it a shot. Whether chugging or nymphing, stripping or swinging, the coho salmon is a ready and willing dance partner for the Alaskan fly angler, so mark your calendars for the fall season and get the gear ready...the fall prince will soon arrive.