Swinging for kings isn’t a dance from the 1930’s, nor is it a hush-hush party for adults. Swinging for kings is one of the most exciting and rewarding ways to fly fish for king salmon. King Salmon are the largest of the Pacific salmon, averaging 20-35 pounds, with the world record coming in at an astounding 97.4 pounds. Brute strength and mind-blowing runs make kings one of the hardest fish to land on the fly. Although stripping streamers and nymphing are effective fly fishing methods, catching a king on a swung fly is arguably the most exciting, and rewarding, for fly anglers. For many the anticipation of a "tug" of a fish grabbing your fly as it slowing swings through a run is what it's all about.

Swinging is not hard to do but like most things, it requires practice to master. Here are the basic steps. First, set yourself up at the top of a run. Once you are in place and ready to fish, cast your line quartering downstream at a 45 degree angle across the river. Cover the water close in, first, then slowly work your cast out until your line is out to the desired distance. Make a large upriver mend to hold the fly and allow it to drop in the water column. Once the line tightens up, drop the rod tip to the water and follow the tight line through to the inside of your swing. Before making your next cast take a few steps down r i ver, then repeat until you cover the entire run. Follow through with the entire swing, kings will often follow the fly through the swing and hit it when the fly stops or as you begin retrieving line to set up your next cast. After fishing through the run you feel like there are fish holding there, change flies and start at the top again. Try a different color or different size fly.

Managing the Speed of Your Swing

The general rule is to cast down at a 45, but this is just a general rule. The speed of the swing is determined by the angle of the cast. Don't be afraid to mix up your swing speed. Aggressive fish may be enticed by a faster moving fly, while less aggressive fish may require a slower swung fly which hangs in their face. To create a faster swing, try casting at more of a 90 degree across the current. This will create more drag on the belly of the line in turn speeding up the pace that the fly is swung. To slow things down, cast the line at less of an angle. Casting down at 30 degree across the current will leave less of the belly for the current to grab, which results in a slow swing. Immediately after making the cast, use up river mending and a high rod tip position to allow the fly to sink. Once the fly is in the “zone,” drop the rod tip and start the swing.

Where to Swing for Kings in Alaska

Many major rivers throughout Alaska have king salmon runs. Some of the more popular rivers are the Alagnak, Naknek, Karluk, and Kanektok. Two of the most prodigious rivers are the Kenai and Nushagak. Some of these rivers, like the Kanektok, are very swing friendly. Rivers like the Kenai can be more difficult to find a king on the fly due to heavy fishing pressure, fast current and milky water. Then there is the Nushagak, a giant river with one of the largest run of kings in Alaska. Epic, long runs with slow to medium flow coupled with huge numbers of salmon make the Nushagak an awesome river for swinging flies.

Good swinging water can be found throughout most rivers, from the upper reaches all the way down to tidewater. To target kings as they move in from tidewater, try focusing on runs 4-8 feet in depth that lie between shallow flats and deep pools. This is where the kings will start to hold. Just before, during and after the high tide is the time to look for fish moving out of tidewater. This is a great time to catch “chromers.” To target holding fish, look for runs that gradually transition from shallow to deep water with moderate current so that you can get the fly down into the strike zone. A lot of fish will sit at the top and bottom of these runs and pools. Shallow, fast runs that drop into deep pools can be hard to swing because of their weird current seams, up wells and eddies. 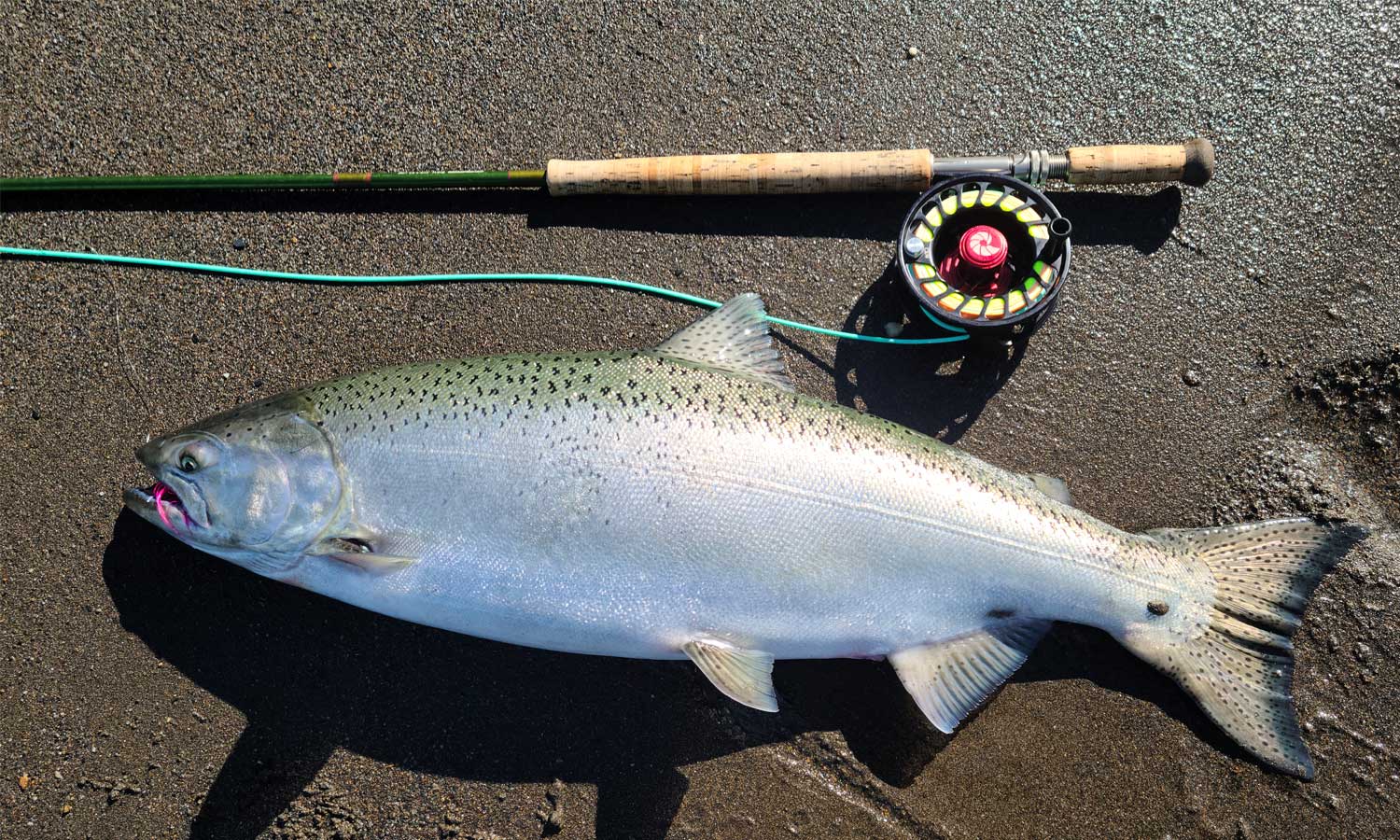 Single hand, spey, and switch rods can be used for swing flies for kings in Alaska. Each style fly rod has its advantages and disadvantages and choosing one depends on personal preference, water types and angling strategy. Check out our pro's and con's list to help you decide which setup will be best for the water that you plan to fish.

Pro's - versatile and will work for most every situation, easy to cast from a boat and easy to travel with.
Con's - requires more false casting, more effort to reach long distances and harder to mend with large amounts of line out.

Pro's - less effort to make long casts, easier to mend line and easier to throw big flies and heavy lines.
Con's - difficult to fish on small water, challenging to fish from a boat.

Switch Rods
Switch rods are short two-handed rods that average 10 ½ to 11 ½ feet in length with 8 and 9 weights being most popular for kings.

Pro's - ability to overhead and spey cast, easy to fish from a boat and good for small to large rivers.
Con's - doesn't cast as far as spey rods 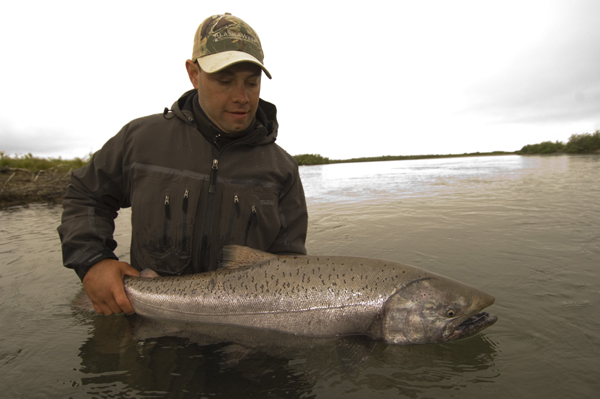 Kings generally hold near the bottom of the river and prefer deeper runs and pools. They are also generally reluctant to come up for a fly. So you will need a fly line that gets your fly down to the fish.

On some rivers, like the Karluk River on Kodiak Island, fishing single hand rod with a floating line or a light sink tip with a heavy fly will put you in the zone. While other rivers, like the Nushagak or Kanektok, may require sinking lines or heavy sink tips to get your fly down. If you are fishing a single hand fly rod, a multi-tip fly lines is a great way to cover all the bases. It is good to have 10'-12’ tips in floating, intermediate, type 3, type 6 and type 8 sink rates to cover as many fishing situations as possible.

As far as switch and spey rods are concerned, a Skagit head system is the most versatile and easy to cast. It is comprised of a thin running line, a Skagit head that matches the grain weight of your rod, and a variety of sinking tips. Having an assortment of 10' - 15' length tips in T-10, T-14, and T-17 densities will cover most spey water situations.

If ever there was a time to spend a few extra bucks, it is on your king reel. A good reel with a smooth drag is an absolute must for kings. There is nothing worse than losing a big king to a reel seizing up or watching your fly line swim away. The reel should be able to hold a few hundred yards of 30lb backing. A good reel can make the difference between beaching a king or falling to pieces and becoming “the grown man that cried. 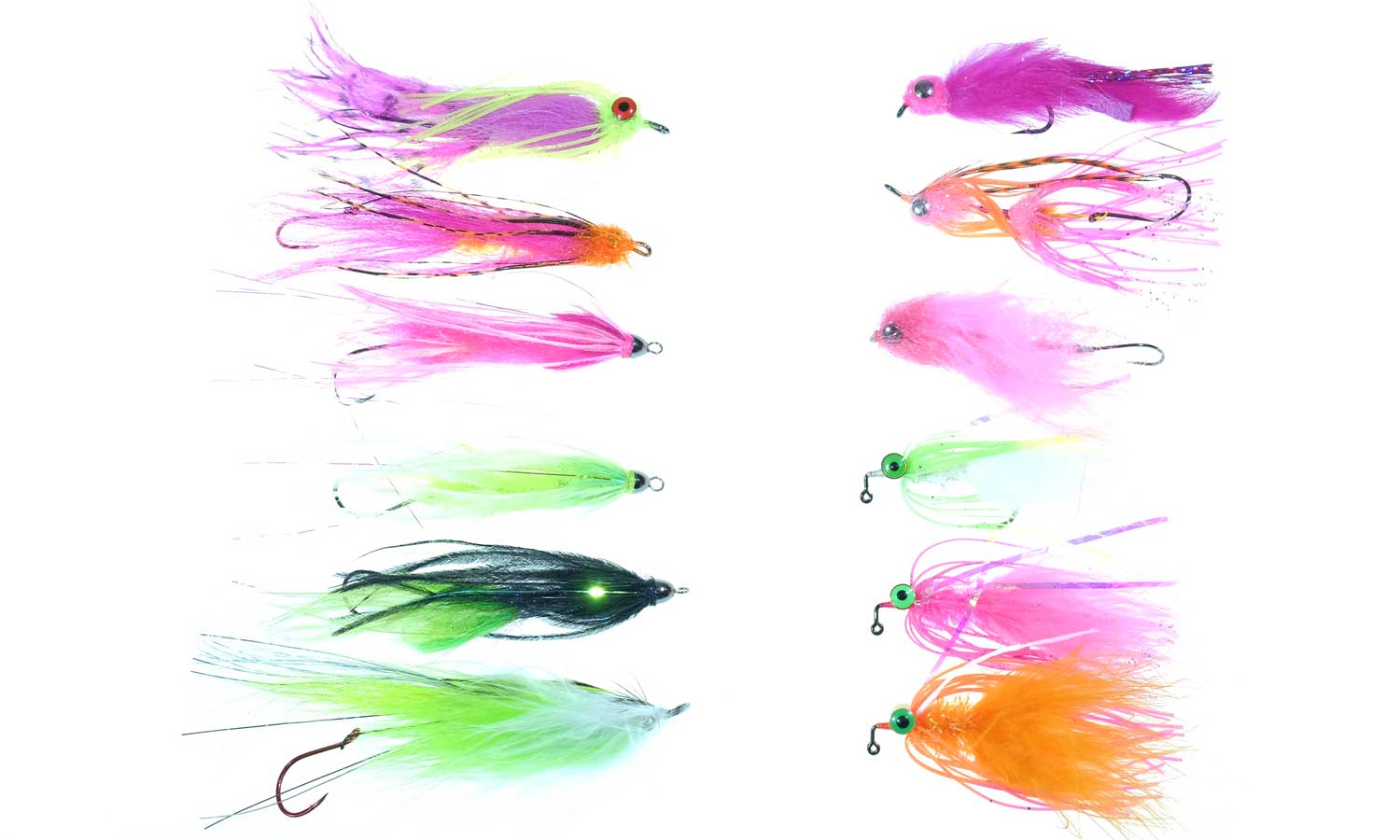 Choosing the Right Fly to Swing

There are a lot of flies in a variety of colors, weights and sizes to choose from when targeting kings on the swing. Here are some general rules of thumb to help you choose the right king salmon flies.

Early Season (May-June)
Go big and bright. Try pink and fuchsia flies on bright days and chartreuse on dark days. Tidewater fish are particularly fond of flies that include combinations of pink, orange, chartreuse and blue.

Late Season (June-July)
As kings move further up river and ease into their spawning mode they tend to prefer dark colors. Purple, black/red, black/orange and black/blue flies can be deadly. For finicky, or "stale", fish try smaller patterns.
Regardless of the time of season, remember that kings hug the bottom so be sure you carry a combination of weighted flies and unweighted flies paired with a sink tip that will get your fly in the zone fast.
If you have any questions about selecting the right gear to swing for kings in Alaska, feel free to contact us or call the shop at 907-586-1550.