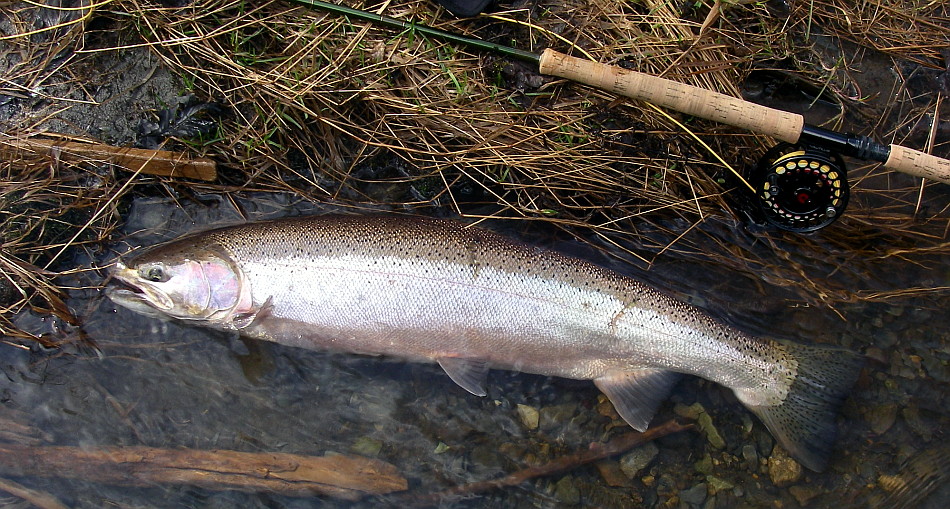 Perhaps the least abundant but most sought-after species of Salmonid is the steelhead. These sea-going rainbow trout are found in over 500 river and creek systems throughout Southeast Alaska, the Kenai peninsula, and Kodiak, but most watersheds support small runs numbering to perhaps 200 returning adults. The "fish of 10,000 casts" is divided into 2 discrete stocks, a spring run available from March to June, and a fall run from September to November, with some unique systems in southeast supporting both runs. Averaging 8-12 lbs with trophy specimens topping 20 lbs, the steelhead is one of the wariest salmonids and rates near the top of the "angling challenge" scale.

Gear and Flies
The steelhead is a formidable opponent once hooked, capable of mad dashes and skyrocketing leaps. The prudent angler gears up with a 7 or 8wt rod matched to a high-capacity reel with a good drag to battle these chrome rockets. Two-handed (Spey) rods can be used on some of the larger rivers such as those found on the Alaska Peninsula. In general, they are too long for most Alaskan steelhead streams.  Depending upon the method of presentation, fly line choices include weight-forward floating lines, sinking tip lines, and multi-tip systems to deliver your offering to the proper depth. Steelhead flies are as numerous and varied as the folks that fish for them. Some Alaska favorites are the Garcia Sculpin, Dolly Llama- Black & White, and the Pink String Leech.

Rods
If you are planning on chasing Alaskan steelhead with a single hand rod, we suggest using a 9-10' 7-8 wt rod. If you are using a nymphing/dead drifting technique, a 10' medium-fast action rod is ideal for long line mends. Seeking steelhead with a switch rod is becoming increasingly popular because it is easy to change from nymphing to swinging. On small Alaskan streams, a 10'6" to 11'9",  7-8 wt switch rod with line grain ratings of 400-550  is recommended. If you are chasing Alaskan steelhead on the Alaska Peninsula or Southwestern Alaska, you can try your hand with a full spey rod, in which case we recommend a 12'6"-13'6" rod.

Reels
We cannot stress enough the importance of a good reel while chasing Alaskan steelhead. With steelhead being the fish of 10,000 casts, you don't want to ruin your chances of landing one because of a skimpy reel. Nothing is worse than an angler crying on the side or the river because of cut corners. Whether it is a cast alluminum reel or a machined, you will want to make sure that your drag is a hearty one.

Lines
The best line for steelhead depends on your chosen method of angling.  If nymphing flies or fishing beads is the prefered method, look for a weight forward floating line or switch line that has a medium to long body. The medium to long floating body is important for line mending and management. If swinging flies is the preferred method, short sink tips in both medium and fast sink rates are recommended.  A multi-tip line with the standard 15' tips supplemented with super-fast tips can be ideal on Alaska's smaller steelhead streams.

Flies
There are a lot of options when it comes to choosing flies for steelhead fishing. Flies can vary from egg sucking leech patterns, large strung out patterns and small nymph patterns. Recently, anglers have switched to using more egg imitations or yarn balls under an indicator, while some still prefer multi colored steelhead nymphs. Hot pink and orange are often a favorite, but don't rule out naturals,especially if chasing fish in the fall or winter.

Beads
Beads were originally associated with fishing for trout during the salmon spawn. They started catching on with anglers in the Pacific Northwest over a decade ago and now have become a staple in most anglers' boxes. For steelhead in Alaska, try beads sizes from 8mm-14mm in hot pink, orange and red. Off colors like blue and chartreuse can be really good when fishing to pressured fish on rivers like the Situk.

"Big Hitter" Trout Package
$1420.00
If you are looking for the absolute finest tackle for pursuing trout, look no further. In this package we have...

Steelhead Bead Selection
$69.95
Whether you are fishing the Situk River in Yakutat, Southeast Alaska, the Kenai Peninsula or Kodiak, our Steel...