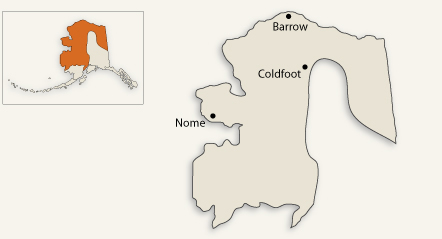 The Big Picture:
The northern expanse of Alaska's sub-arctic and arctic regions is a landmass so large that it boggles the mind. Imagine, if you will, an area larger than the state of Texas, but with fewer than 1400 miles of roads. Vast, empty tracts of land dotted with lakes and bisected by rivers that see little if any sport angling pressure. It sounds too good to be true, and for the most part, it is. The state's arctic region sees fewer than 50 days a year where the temperature is above 32°, and many lakes are icebound 320 days a year. While the rivers flow for perhaps 3-5 months a year in the arctic and sub-arctic, many are glacial main stems with turbid, low-to-zero-visibility water. Most of the angling opportunities lie in the clear water tributaries of the large glacial systems, as well as in the numerous lakes of the sub-arctic region.

The southwestern portion of the arctic hosts all 5 species of pacific salmon, and anglers also encounter grayling, northern pike, sheefish, Dolly Varden, arctic char, and lake trout. Rainbow trout are also available, but are mostly confined to the southern extreme of the region. Compared to the rest of Alaska, this area hosts few lodges and air services for the visiting angler, but there are a few options for the hardened ‘Do-It-Yourself’ fish-a-holic. Many of the rivers that flow into the Bering Sea have good-to-excellent angling opportunities, and there are outfitters that rent rafts and other goods for extended float trips, as well as provide air support for drop-off and pick-up. Unlike other ‘Do-It-Yourself’ trips, these trips represent a large financial outlay, and once you are out in the bush you are pretty much left to your own devices.

As with anyplace in Alaska that has seasonal abundance in the form of fish runs, brown bears often congregate in the area's southern and western river drainages to feed on the yearly bounty of salmon. Fishing and camping around bears is not without its risks, and while salmon runs and fishing results can often be predicted, bears can not. The United States Forest Service (USFS) has a tremendous amount of information on traveling and camping safely in bear country, and we strongly recommend reading this and getting a clear understanding of the essential practices. In addition to bears, the other hazard of the sub-arctic and arctic region is bugs. In the short summer season, the most abundant animals by far are the mosquitoes and black flies. Without netting, repellent, or perhaps a good stiff breeze, the swarms of biting insects in the region quickly become unbearable for most warm-blooded mammals. On any trip in the area, be sure to bring a Bug Jacket, Head Net, a "bug-fly" for your tent, lots of repellent, and a stout constitution.

Fly Fishing in the Arctic: When & Where To Go

Summer: June and July
Late May and early June in the southwestern sub-arctic is ice-out time, when the lakes open up and the fishing can begin in earnest. Pike, grayling, lake trout, Dolly Varden, and rainbow trout can provide great sport in the late spring- early summer as they feed on the out-migrating salmon fry. Try minnow patterns such as the Salmon Fry and Clouser minnow around lake outlets and in the clear tributaries of glacial main stems.

Above the arctic circle, the "midnight sun" shines 24 hours a day in late June, and this abundant daylight also provides the backdrop for the short and intense salmon runs of the region. Kings, sockeye, and chum are available in the western coastal rivers region during late June and July. Fishing is often good at tributary mouths, where clear water pockets can be found in an otherwise unfishable glacial river. For kings, try big, two-toned patterns like the Guide Intruder as well as the Fat Freddie and the Hareball Leech. Reds often respond well to small, sparsely dressed patterns like the Sockeye Lantern, and chums go for all things chartreuse and cerise.

Sheefish are also available during June and July. Try larger bait fish patterns like a Match The Minnow or a Flashtail Clouser Jig, and remember to fish them deep. Sheefish are found from headwater lakes to tidewater sloughs in some rivers of the region, and these "tarpon of the north" can be great sport on mid-weight fly tackle.

Late summer: August and September
By August, many of the southwestern arctic region's coho runs are in full swing, while the earlier runs of reds, kings, and chums are already dying off post-spawn. Coho can be caught with many techniques using different groups of flies, and the angler-in-the-know will have a wide selection, including surface flies like TechnoWogs, streamers such as the Flash Fly and Starlite Leech, and dead-drift flies such as the Egg Sucking Leech and the Coho Kryptonite. Rainbow trout, Dolly Varden, and grayling go into predatory mode as the salmon spawn, and often position themselves right behind spawning pairs to eat stray eggs that drift out of the redd. Beads in an assortment of colors are the go-to option right now, but the well-versed angler will also have a collection of Battle Creek Specials, Glo-Bugs, and other "soft" eggs at hand.

Elsewhere in the arctic region, the last of the salmon are spawning as the first snow of the year flies in September. Sheefish are still available, as well as the odd late Dolly Varden feeding on decomposing salmon carcasses. For the sheefish, try minnow patterns such as the Half-N-Half fished deep, and you can't go wrong with the Flesh Fly for Dollies in the fall. September is also "last casts" for pike, as their lakes and rivers will soon be icebound for the remainder of the year. Large leech patterns and two-toned streamers like the Flashtail Whistler are the meal ticket for these late season water-wolves.

Be sure to check out our Run Timing Chart for a comprehensive look at the fishing season in the Arctic region.

Dry Fly & Nymphs for Alaska Selection
$59.95
Grayling, rainbows, and cutthroat love dries and nymphs. These fish alternate between easy to catch and incred...

"Getting Started" Trout Package
$499.95
Looking for a trout rod to throw streamers and easily toss bead rigs? Our custom Echo Boost rod with a Sage Sp...

Simms Midlayer Top - Raven
$79.95
The Simms Midlayer top is a 3/4 zip top that is meant for Alaskan fishing standards. It keeps you warm and ins...