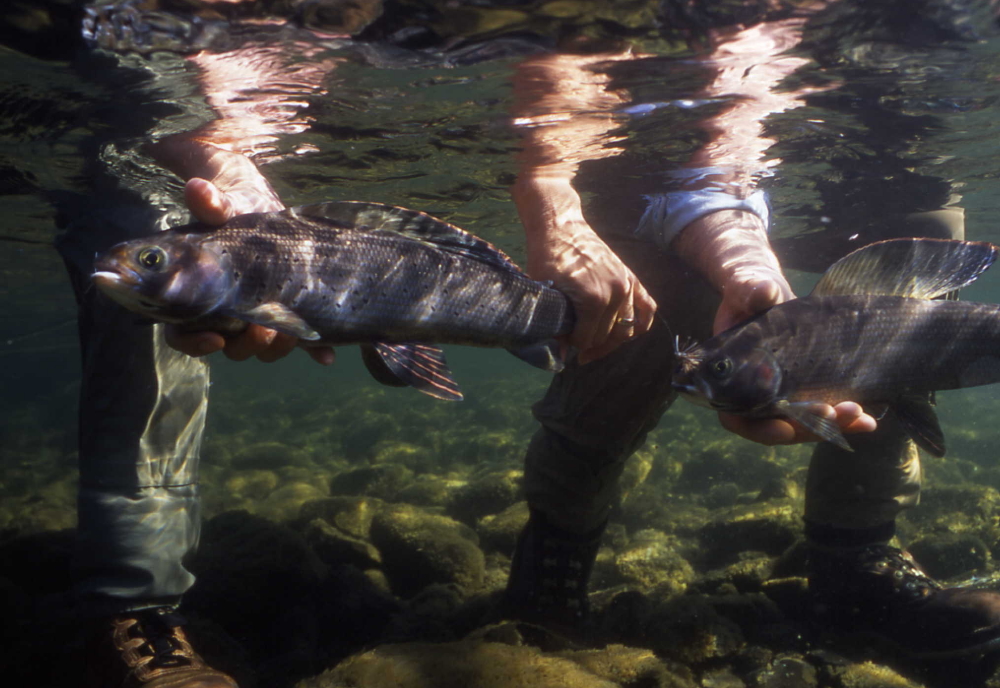 Meet The Fish: Grayling
With its distinctive sailfish-like dorsal fin, the grayling is perhaps the most striking of Alaskan game fish. Found in all regions of the state, the grayling is equally at home in lakes, small streams and big rivers. The grayling is available from April to November, with the peak fishing period being June through August. Most grayling average 8-14 inches and about 1 lb, but fish up to 24 inches and 4 lbs have been recorded. Feeding primarily on insects, the grayling offers one of the finest dry-fly fishing opportunities in Alaska with its decidedly un-picky feeding style.

Gear and Flies
At times, the grayling can be the fly angler's dream fish, readily rising to most any dry fly regardless of pattern or technique. Other times, Alaska's grayling will be finicky eaters of only one particular insect stage. Either way, they provide great sport for the angler equipped with a 3, 4, or 5 weight rod with a suitably lightweight reel. By far the most common fly line choice for grayling is a weight forward floating line. Tapered 9 foot leaders terminating with 4X-5X tippet are generally sufficient. As previously mentioned, grayling are mostly insectivorous, and the fly box of the angler in-the-know will contain several iterations and life stages of mayflies, caddis flies, midges, and mosquitoes.

Rods
Good single hand rods for grayling range from short and light 7'6" 3 wts to the standard 9' 5wt,. Some anglers even prefer shorter and lighter rods to be used specifically with dry flies on smaller water.  The preferred rod is greatly influenced by not only where and how, but if the rod will double as an all-around trout rod, too.  Rods should be of medium to medium/fast action as having the capability to mend line easily is essential to getting good drifts.  Grayling are often referred to as "dry fly dumb," meaning that they'll often eat whatever is offered to them. There are times when grayling do get picky and having a good drift with the right offering can mean the difference between hooking up or getting duped.

Reels
Reels for grayling should create good balance with the rod that they are being matched with. Sophisticated drag systems aren't as necessary as they are with trout and salmon outfits.  If the reel is being coupled with a larger rod that will be used for trout also, a good drag should be considered.  Some anlgers like the sound and feel of the good old "click and pawl" reels.  These reels often go great with bamboo and fiberglass rods, which give a vintage feel when fishing.


Lines
Weight forward lines are generally the choice for grayling due to their ease of loading the rod and their wide-spread availability. A double taper is a fine choice as well. When choosing an appropriate weight forward line, err on the side of delicacy over power. Most casts to grayling will be relatively short and a soft presentation is helpful.

Flies
The grayling's diet greatly varies depending on the time of year, location and food abundance. They will eat everything from small midges, snails and nymphs to salmon eggs and terrestrials. It is not unusual for grayling to take mouse patterns that are much too large to fit into their tiny mouths.  A nice selection of dries and nymphs is always recommended as are small crystal buggers and leech patterns. In late summer, be sure to have a few egg patterns, flesh and beads if there will be spawning salmon present.

Dry Fly & Nymphs for Alaska Selection
$59.95
Grayling, rainbows, and cutthroat love dries and nymphs. These fish alternate between easy to catch and incred...

"Getting Started" Trout Package
$499.95
Looking for a trout rod to throw streamers and easily toss bead rigs? Our custom Echo Boost rod with a Sage Sp...

Echo Base Package
$169.95
Looking for a solid entry level package that won't break the bank? Echo does it again with the Echo Base Kit. ...